The founder Dr. T. Samuel Joseph (SHYAAM) was born in an Orthodox Christian family. His parents were teachers and happened to live in the missionary compound in Guindy. His mother who played the Organ in the church was His inspiration to take up music. As a boy, the first person who touched him with compassion and kindness was an English missionary lady Mrs. Chandler who tended to a beggar affected with leprosy who had taken shelter outside the mission compound. When none of us ever bothered to even glance at him, this lady would go and clean his wounds and feed him every day, even during stormy days.

He learnt to play the vilon at the age of 14. He joined M.C.C College Tambaram took his B A Degree and was the leader of the college orchestra. Later he was called to play vlion in films, then he became a music director and composed music for more than 350 films. M. S. Viswanathan encouraged him to learn Indian classical music and that was how he became a student of Sri Lalgudi G. Jayaraman. Sri Lalgudi asked him to compose the Introduction and finale for his ten Thillannas called Dance of Sound. This great album was produced by HMV in the year 1978.

Once a film producer took him to London to see the location for a movie. In London he visited a church where he found hardly 15 members attending the morning service which was a great surprise, as these Scottish and English missionaries had influenced many a million in India to convert to Christianity. At the end of the service he met an elder who wanted to know our form of worship in India. He was surprised that we still follow their form of worship, and we had none of our own. This question touched him to come back and revive the Tamil Christian music in its ancient carnatic form. He researched and found a treasure trove in the lyrics composed by great Vedhanayagam sastriar, Abrham Pandithar and many others which have been sung in Tamil Churches for Centuries and now fading into the oblivion.

While driving on Arcot Road for his recording, the traffic came to a standstill to let three blind people cross the road. This scene made him think what he has done to alleviate these poor and blind people. This thought lead to the birth of the Christian Cultural Academy.

To Revive these ancient Christian Lyrics which had no guide for youngsters to learn he brought up a concised book with both western and Indian carnatic notations in the year 2003 and called it YESU PUGAZH PAADUVOAM. After completing 25 years of the Christian Cultural Academy he founded the Chennai Cultural Academy Charitable Trust in the year 2011.

It struck him one day that he should introduce a project whereby he could teach youngsters between the age group 5 to 50, the real form of carnatic music which could in turn someday help even the deaf and the blind to make it as their profession. Thus was born the Geethanjali Isaikoodam (Indian Music School).

Geethanjali Isaikoodam is the brain child of Dr. Samuel Joseph (SHYAAM) who had a vision to start this school of Indian music to teach youngsters to sing in the proper way.

To learn the intricate nuances of Indian classical music, not just about the Raagaas and different Thalams , but also the deeper knowledge of pure Tamil lyrics.

Vidwans and pandits with pure classical knowledge are involved in Geethanjali to train the youngsters. The syllabus also includes Thirukkural of the greatest poet Thiruvalluvar and songs of Mahakavi Bharthiar.

It is also the mission of the founder to train physically challenged to perform on different platforms and make them professional and also popular in their field to earn their livelihood. 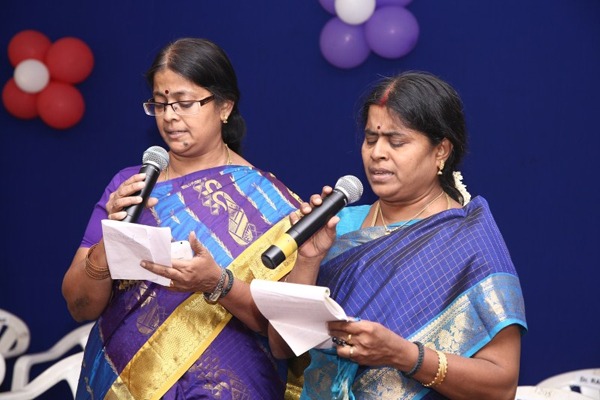 Geethanjali Isaikoodam has appointed music teachers both men and women who are masters of Carnatic music to go to various places to teach young and old, interested in carnatic music.

The founder has introduced “Geethanjali” as a course where a student could learn c a r n a t i c mu s i c i n Si x Semesters in Three years. At the completion of which the student will be issued a certificate.

It is the dream of the founder that someday, children would learn to sing Christian Lyrics in Carnatic form and that the future generation would change the form of worship in Churches to incorporate our ancient Tamil Christian culture and heritage. 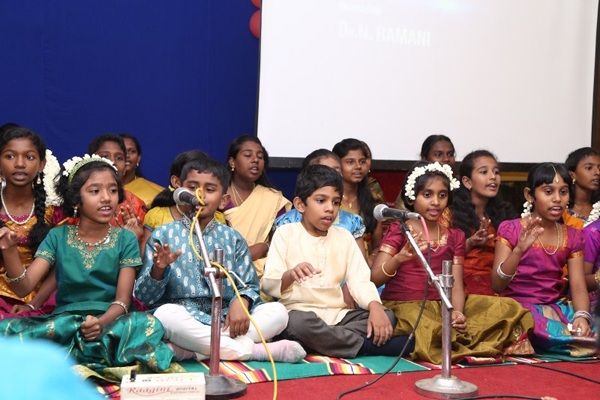